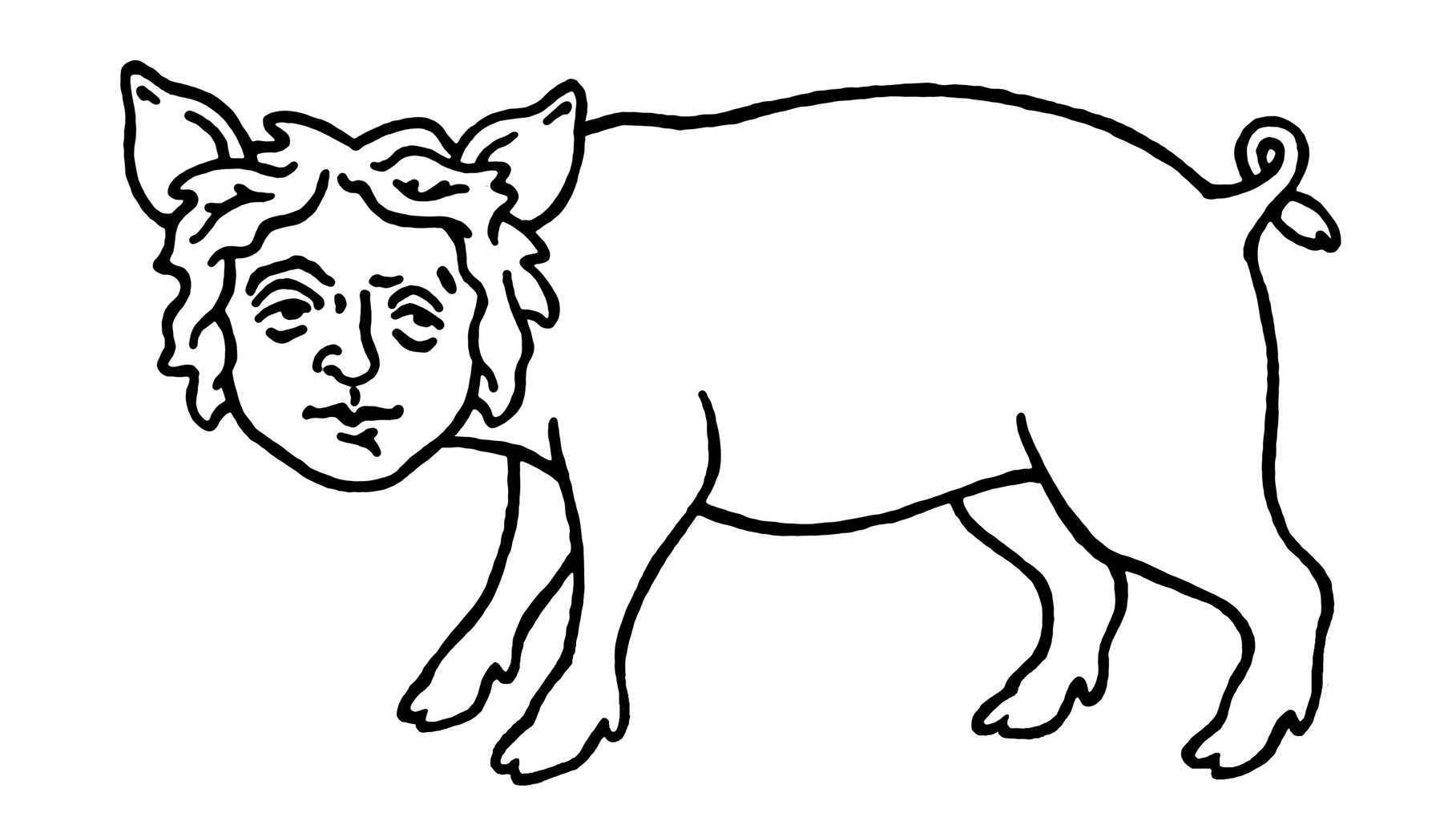 ‘The animal I really dig / Above all others is the pig,’ wrote Roald Dahl. The Freethinker cannot disagree. The association between pigs and freethought arguably goes back all the way to classical antiquity, when they became associated with the followers of the Greek philosopher Epicurus. The latter had argued that the gods had no influence on human affairs, that the soul did not survive the body’s death, and that pleasure was the only good. His disciples, especially in the Roman era, had something of a reputation for gluttony, as well as a suspicious indifference to the prospect of an afterlife. A few centuries later, the early Church Fathers looked upon the Epicureans as atheists bound for hell.

The pig-person of the Freethinker is based on a detail of The Forest Fire, a painting by Piero di Cosimo from around 1505, and now in the Ashmolean Museum. The painting shows a fire bursting out from the centre of a dark forest, with birds and animals scattering in all directions. Curiously, two of the animals, a pig and a deer, have human-like faces, which scholars believe may have been added in at a later stage. One interpretation of the painting is that it refers to an account of the birth of human civilisation from primitive savagery in On the Nature of Things, a philosophical poem by the Roman Epicurean Lucretius. This poem also contained many a scathing satire of organised religion.

From our perspective, the pig is a generally appropriate symbol for an irreverent outlook. Horace, the Roman poet and satirist, called himself ‘a pig from Epicurus’ school.’ This may have referred to his well-fed appearance and philosophical proclivities, but also, we feel sure, to an appreciation of the sardonic potential of the porcine species. In the eighteenth century, a portable Roman sundial in the shape of a ham, or pig’s thigh, was discovered at the Villa of the Papyri, Herculaneum. This palatial complex on the Bay of Naples is known to have been a centre of Epicureanism until it was destroyed in the eruption of Vesuvius. Philosophy and science, the swinish sundial seems to say, need not be incompatible with a sense of humour.

The pithy connotations of piggishness were further recognised in 1530, when an obscure Flemish monk known as Placentius wrote a miniature mock-epic in Latin verse about the battle between the pigs and the hogs (Pugna porcorum), in which every word started with the same letter. In the seventeenth century, it was observed of the Stoic philosopher Seneca, with his penchant for the pointed phrase, that he ‘writes, as a boare doth pisse, scilicet, by jirkes.’ Finally, no history of satirical swine would be complete without mention of Napoleon, Snowball, and the other subversives of Animal Farm.

Our porcus sapiens is by the cartoonist Paul Fitzgerald. We hope to continue the tradition of irreverent enquiry long associated with the species, and, in Horace’s words, ridentem dicere verum – to speak truth with a twitch of the snout.