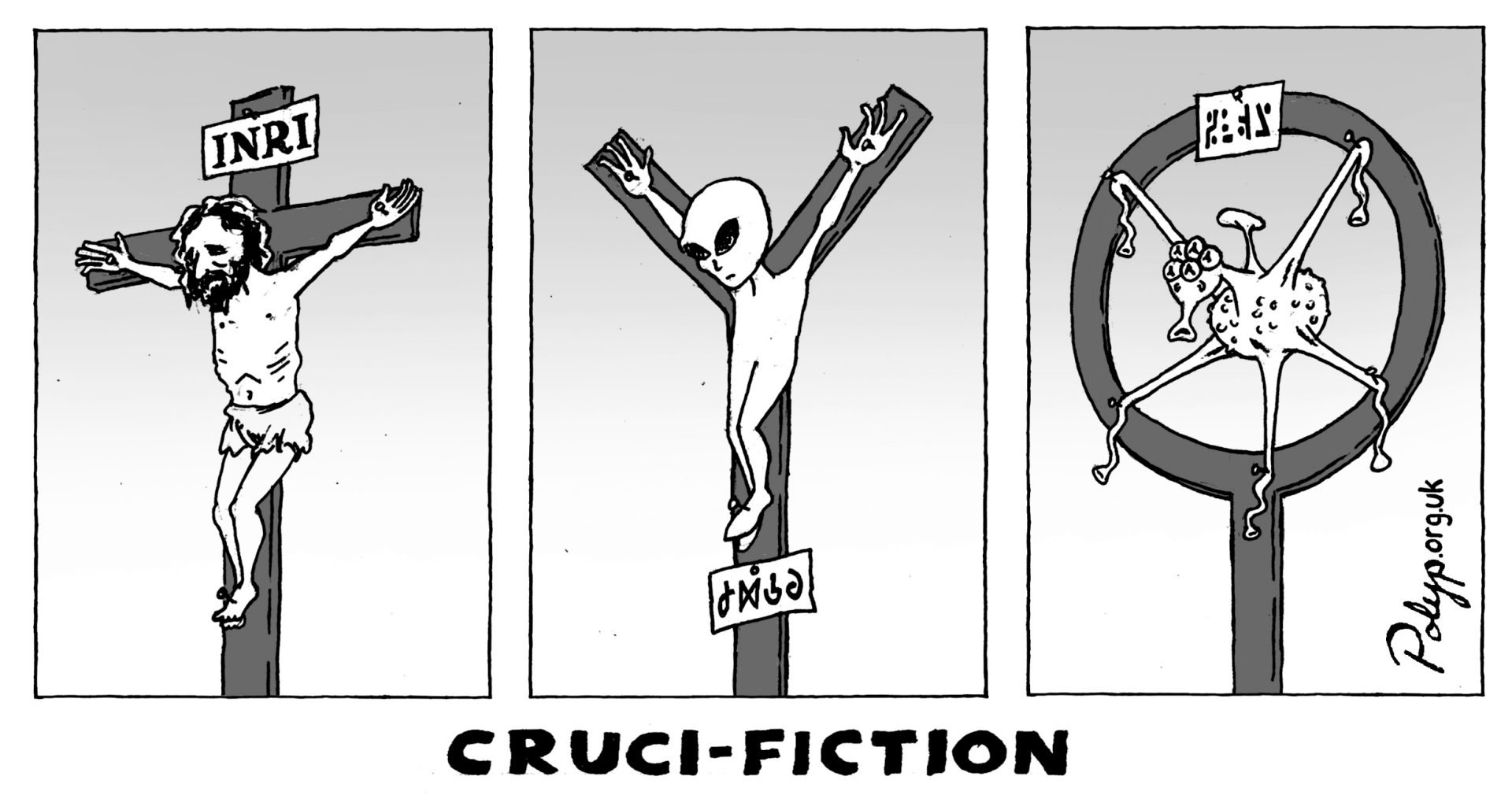 Introducing ‘You’d Better Believe It’, a new series of reports on the most divisive inclusive issues of the day by Modus Tollens, our correspondent for Diversity, Respect and Social Cohesion. First up: an exclusive interview with Jesus, Son of God.

Nearly 2,000 years ago, Earth time, a bearded vagrant calling himself Jesus of Nazareth led some peaceful protests against social inequality, offended religious sensibilities, and ended up being crucified by the Roman Imperial administration.

So far, so first-century. A fringe collective known as the “Disciples” have always claimed that Jesus, a.k.a. Christ, a.k.a. the “Son of God”, “descended into Hell” after his crucifixion, “rose again from the dead” two days later, and ended up “sitting on the right hand of God, the Father Almighty.” But without actual evidence for Hell, God, or the afterlife, these claims have always been controversial.

“The crucifixion bit I get,” said Thomas (1,982) from Essex, a former colleague. “They’ve found splinters of wood from the cross, patches from the shroud, bones, hair, whatever. That’s hard evidence. Shit, His mortal remains are all over Europe. But descending into hell and then ascending into heaven? Sounds like science fiction to me.”

Mary (2,045) from Bethesda, who claimed to be Mr Christ’s estranged mother, questioned His bona fides. “It’s not like heaven’s nearby – at least for most of us. You’d need a pretty advanced rocket. And where would He be getting that kind of money? Not from me, I can tell you.”

The Freethinker can now disclose the truth behind the legend. All was revealed in an exclusive interview with the S.O.G. Himself, who descended in a silver spaceship onto the plains of Jerusalem, Alabama, where your correspondent caught up with Him.

Christ (stepping out of his spaceship in a blaze of glory): Hello. I’m the Son of God.

Freethinker: Christ! (Thinking quickly) Do you have time for an interview?

Christ: Verily I say unto you: yes.

Freethinker: Wow! Um, so, first of all, did it really happen? The descending into hell – the rising up again?

Christ: Do you know something, you’re the first person who has asked me that in nearly 2,000 years? On this planet, anyway.

Freethinker: But did it really happen?

Christ: Yes, of course…in a sense.

Freethinker: ‘In a sense’?

Christ: Depending on your interpretation.

Freethinker: OK…What do you mean by ‘on this planet’?

Christ: You might think it was a minor detail, and trillions of my followers would agree with you, yet nonetheless, from aeon to aeon, a few sceptics do occasionally ask me how I fit it all in – the birth, preaching, melodramatic death, etc. – on the quadrillions of planets across the universe with life forms that are sufficiently advanced to appreciate me. The answer is good time and space management. And a diary in eleven dimensions.

Freethinker: Woah – hang on – stop the bus. You mean to say you have been crucified on other planets too?

Christ: Earth has only a very small share of my followers, you know.

Christ: How many angels can dance on the head of a pin?

Freethinker: So you really have been incarnated, repeatedly, as an alien?

Christ: Extensive research by my highly qualified team of archangels has shown that, time and again, audiences of all permutations of life-capable matter respond positively to the crucifixion story. It has been shown to be by far the most effective way of getting my message across. The personal touch. The highs, the lows – reversals of fortune, triumph over disaster. From Andromeda to Virgo, everyone loves a story about cheating death. Even if they can’t do it, they like to believe it’s possible.

Freethinker: What is your message, then?

Christ: And ‘crucify’ is only your Earth-word for it. I would say that, more broadly, what appeals to audiences across the universe is some tale of highly individual, graphic suffering, which a few of them can bear witness to and then fabricate outlandish mythologies around, by which future generations can justify oppressive power structures, or indulge in sadomasochism.

Freethinker: Wouldn’t it have been easier, or at least less painful, if you had chosen one planet to conduct your self-immolation on, for the sake of all life forms everywhere?

Christ: Maybe, but it wouldn’t have been fair on the others. Besides, I’ve got to find something to do with myself. Dad is getting old, and heaven hasn’t been the same since we expelled Lucifer.

Freethinker: On that topic, your followers here claim that your Father so loved the world that He offered you up to die for our sins. Did He love all aliens–diverse life forms this much, all round the universe?

Christ: Yes, that’s one explanation that I’ve heard a lot. But those who say that, blind mortals that they are, have missed the obvious point.

Christ: It’s not about me or dad loving them. It’s about them loving us. Or me. We created the universe. We want some credit.

Freethinker: You’re so desperate for fame that you were prepared to die in agony for it – gazillions of times over?

Christ: It wasn’t that bad, really…

Christ: Well, it was, of course, relative to the life forms in question, but when you’re omnipotent, you have a different perspective.

Freethinker: Did you ever feel like a charlatan? A fraudster? A fake? Isn’t it all just a conjuring trick – playing smoke and mirrors with the space-time continuum?

Christ: No, thou blasphemer, it is not. Each incarnation and crucifixion is the real deal. And don’t you dare print otherwise, or my dad will get you with his thunderbolt.

Freethinker: So why here, now? On Earth, I mean. You’ve returned. Is this the second coming?

Christ: Absolutely, and I’ve brought the four horsemen of the apocalypse with me in the luggage compartment… Seriously, though, my following has been in decline on this planet in recent centuries. Not that it matters on the scale of the universe, given your diminutive numbers. But then again, on the scale of the universe, what does matter? Me, I guess. So here I am. Fitting in a quick interview before a lunch date in Alpha Centauri. (Pushes back his voluminous sleeve to reveal what appears to be an extremely expensive watch.)

Freethinker (hastily): Mr Christ, it’s been a pleasure, but I’m already late with my filing deadline.

Christ: No worries, Creature of a Day.

Freethinker: Where can I contact you if I need further information?

Freethinker: Oh. I never thought of that. Does it work?

(But Christ is already back in his spaceship, which with a roar zooms up through the atmosphere and out of sight.)

Image of the week: Cruci-Fiction